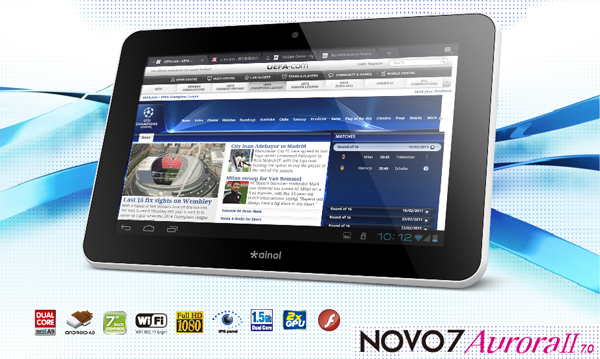 ONLY $159.99 (16GB version, special promotion price) on Sale from Ainol’s oversea distributor uPlay Tablet , the Ainol Novo 7 Aurora II is the 2nd generation of the first 7 inch tablet with a 150 viewing angle IPS capacitive screen (same screen as the iPad 2) and runs Android 4 .0.3 Ice Cream Sandwich . What is the difference between the Elf II and the Aurora II ? Well both run Android 4 .0.3 Ice Cream Sandwich OS. Both have a 1.5GHz AMLogic ARM 2nd generation Cortex-A9 based dual-core CPU. Both also have HDMI out, and both have  front facing webcam. The difference is that Aurora II has IPS screen , and body is thinner (only 9mm). The Aurora II , like the ELF II both have Google Play (Android Market) pre-installed.

You can buy it from our Ainol NOVO 7 Aurora II product page.